There once twas a sheep that lived happily roaming the forest and climbing the rocks, but he was abandoned as a little baby by his parents but he grew up to be a strong powerful sheep with nice fluffy wool and big hard horns. But one day he was found by an elderly woman and she took him in to feed and nurture him. But it turns out the sheep was a DRAGON disguised as a sheep and it planned to eat the old lady for dinner, turns out this dragon has done this before and would continue doing it again unless the old lady stopped it. So she took out her sword and shield because like that dragon she was also in disguise but instead she was a warrior feared all over town and she was hoping to someday find the dragon and slay it for good, but mostly because there was a $1,000,000 reward for slaying it. She decided to challenge the dragon head on. The dragon accepted the challenge. The dragon breathed flames almost as hot as the sun but that didn’t stop the warrior from trying to get that reward. They fought for days and nights on end, hardly stopping for breaks or even for a breath. But the dragon was almost out of energy and the warrior saw this as her chance.  Powerfully she wielded her sword up in the air and the dragon swung with its enormous claw and the warrior avoided it. She stuck the claw with her sword using it to maneuver her way up to its neck, the dragon knew what was happening but it was too late, he took one final breath and the warrior made one slash cutting off the dragon’s head. It never bothered anyone ever again because it was dead. The warrior collected her large reward and went on her way to slay other dangerous beasts and monsters; it’s her hobby. 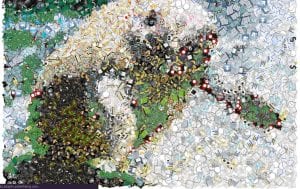 Manatees are one of my favorite animals so I decided to make one as my emoji mosaic, visit EmojiMosaic to make your own!! Life´s to short so be lazy